An illustrated guide to LA trees and flowers 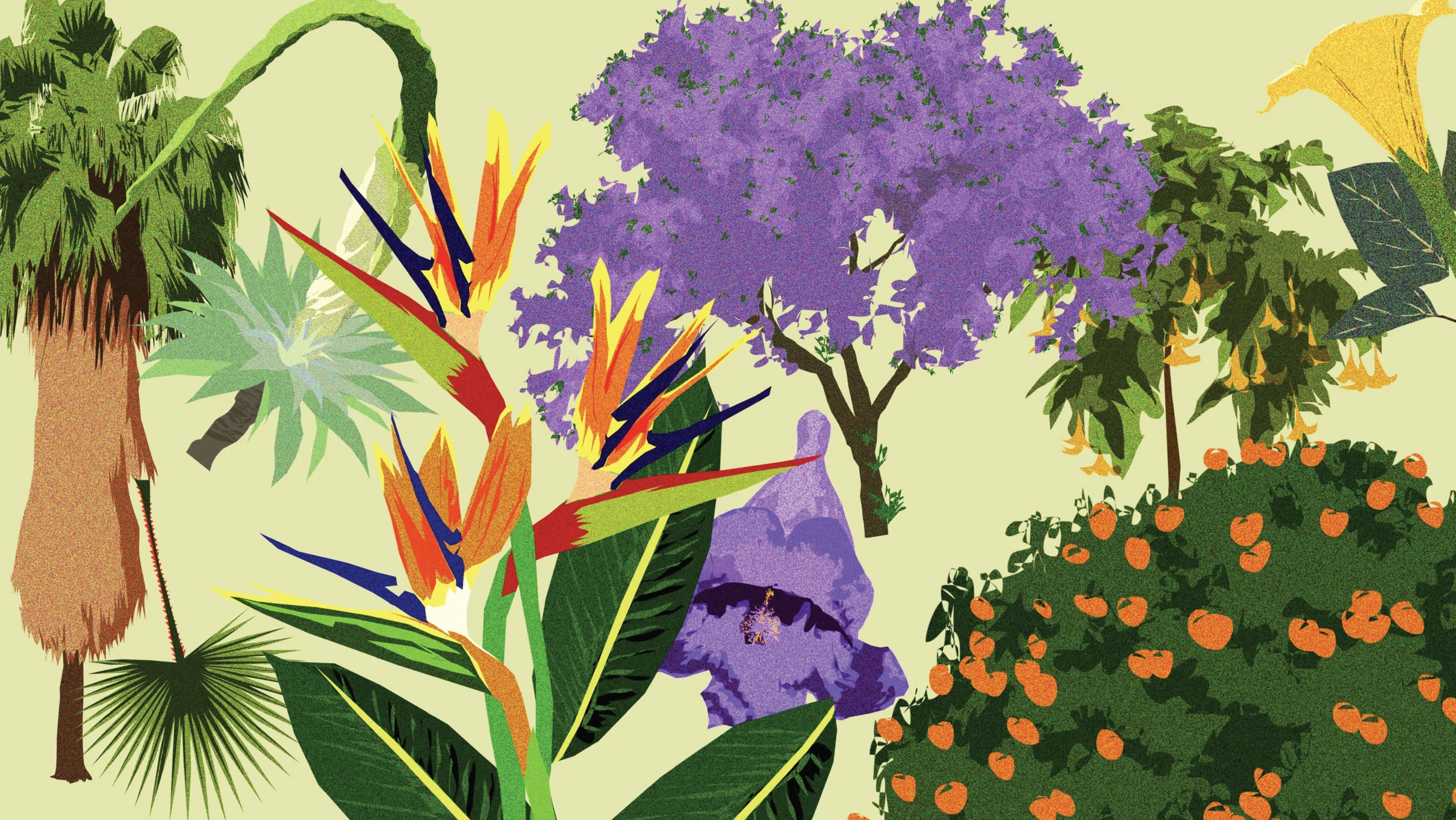 From palm trees to sweet jasmine, get to know some of the flora that give LA its distinctive local color

Thanks to its balmy Mediterranean climate and unique topography, far from being a concrete jungle, Los Angeles is home to a wildly diverse array of trees, plants, and flowers. While it would take several lifetimes to learn them all, here are 16 that every Angeleno ought to be familiar with.

1. Mexican fan palm
Fast growers that can reach heights of more than 100 feet, Mexican fan palms are the city’s most common variety. In 1931 alone, Los Angeles’s forestry division planted more than 25,000 of them, partly as a Depression-era unemployment relief effort, and partly as a citywide beautification project in preparation for the 1932 Olympics.

It’s impossible to say how many of these old-timers still sway over us today, but given their known lifespan of 100 years, give or take, any survivors would have to be in their twilight stage—and they are not being replaced.

2. Canary Island date palm
Viewed as more upscale than common fan palms, Canary Islands became the palm of choice along the boulevards of Beverly Hills, Hancock Park, and other affluent neighborhoods in the 1920s and ’30s. Also known as “pineapple palms,” they are distinguished by the diamond-shape pattern on their trunks, caused by the scars of past leaves, and their bright orange-yellow flowers.

4. Orange trees
Oranges arrived in Southern California with Spanish missionaries, who planted one of the first groves in the region at Mission San Gabriel in 1804. But it wasn’t until the 1870s that the citrus industry really took off, thanks to the introduction of a seedless variety of orange from Brazil, which later became known as the Washington navel.

The advent of refrigerated shipping a decade later really kicked things into high gear, and in short order, vast swaths of what is now Pasadena, the San Fernando Valley, and, of course, Orange County were blanketed by orange groves. Most of the groves got squeezed out by the post-WWII population boom and suburban sprawl, but orange, lime, and lemon trees can still be found in countless yards all over the city. And for those folks who don’t have a yard, or whose yards are without fruit trees, there’s the Endless Orchard, which maps the location of publicly accessible fruit-bearing trees in your neighborhood.

5. Angel’s trumpet
Its name might be cute, and its musical instrument-shaped flowers pretty, but don’t toot on those horns—they’ve got hallucinogenic properties and are highly toxic, as more than a few curious teens who’ve ingested them in the hopes of getting high have learned firsthand.

6. Jacaranda
For 10 months a year, these South American imports are content to blend into the landscape, providing shade and shelter in low-key fashion while quietly biding their time. Then one spring day, as if by prearranged signal—Shazam!—they turn into drama queens, unveiling their vivid violet canopies in concert for maximum impact. When you find yourself feeling less dazzled by the annual showcase of purple haze than annoyed about the mess that accompanies it, congratulations—you’re now a local.

7. Gold medallion tree
Native to Brazil, the gold medallion tree is a relatively recent arrival to these parts, introduced via the LA County Arboretum’s plant research programs of the 1960s and ’70s. Hardy and drought-tolerant, it’s used for reforestation of natural landscapes that have been destroyed by fire or overgrazed by herd animals. On top of being practical, gold medallions are visually arresting, brightening summer and early fall with their sunny yellow blossoms.

8. Moreton Bay fig
Like non-native palms, Moreton Bay fig trees don’t make a whole lot of sense in our urban jungle. Originally from Australia, they are best suited for rainforests. They take up a lot of space, and their thick roots wreak havoc on sidewalks and plumbing systems. Not that Angelenos hold these drawbacks against the majestic giants—in fact, three separate plantings of the trees around the city have been awarded Historic-Cultural Monument status.

9. Bird of paradise
The official flower of the city of Los Angeles, is, rather fittingly, a transplant. Imported from South Africa in 1853, the bird of paradise can bloom year-round or suspend growth during periods of drought, but winter is its favorite time to flower. The brightly plumed plant’s nectar is also a big draw for brilliantly colored hummingbirds and other pollinators.

10. Bougainvillea
Admittedly, we have no hard data to back this up, but it seems safe to say that the mental image of a classic 1920s Spanish draped in fuchsia bougainvillea has enticed untold millions of transplants to move here. However, if facts are what you’re after, here’s one: Los Angeles County is home to the single largest growth of bougainvillea in the entire United States. Planted circa 1901, the Glendora Bougainvillea stretches over 1,200 feet in length and rises up to 40 feet in height.

11. Foxtail agave
Though it may look like something dreamed up by Dr. Seuss, the foxtail agave originated in the mountains of central Mexico. It can take a decade or longer for the succulent to bloom, producing a hefty, arching stalk between 5 and 10 feet long covered in tiny flowers inviting pollination. The bad news: They can only bloom once before dying. But on the bright side, by the time a foxtail agave reaches the end of its life span, it will usually have a number of offshoots, or “pups,” at its base that repeat the cycle.

12. Jasmine
One of the rewards of becoming a resident of Los Angeles is getting to know all the flora that you miss as a mere visitor due to their brief blooming and flowering period. Exhibit A: night-blooming jasmine. Between June and September, this evergreen shrub, also known as “queen of the night,” emits a scent so intoxicating, it’ll make you feel like re-enacting your own private version of La La Land.

13. Century plant
Agaves require almost no irrigation and are ideally suited to Southern California’s sandy, alkaline soil. When they reach maturity, at anywhere between 10 to 25 years old, they send up an asparagus spear-like flower stalk, then pass away from the exertion. These bad boys come in blue or stripey varieties with barbed leaves that can grow up to 6 feet long. It’s not just their sharp barbs that you need to watch out for—the agave’s leaves contain toxins known to cause burning rashes.

14. Prickly pear
Whoever gave the Opuntia cactus the name “prickly pear” was off on the second part—its fruit is actually a type of berry—but they sure got the “prickly” part right. Not only do they sport large, spiny needles on their paddles, they’re also armed with tiny, deceptively fuzzy barbs called glochids, which detach from the plant at the slightest touch and eagerly attach themselves to whatever touched them. Removal is both painful and painstaking.

But if you can manage to harvest the fruit without falling victim to the prickly bits—one popular method involves thick gloves and a stack of newspapers—it’s a good source of fiber, antioxidants, calcium, and vitamin C.

15. Pampas grass
With its graceful, feathery plumes that range in color from pink to silvery white, pampas grass is certainly a treat for the eye. Alas, this South American native has been classified as an invasive plant, due to its ability to self-seed and out-compete other native species. And if that wasn’t bad enough, it’s also a major fire hazard.

16. Our Lord’s candle
Long considered a species of yucca, this statuesque plant, found amid the chaparral and sage scrub landscapes of Southern California and Baja, Mexico, is actually more closely related to agaves. Pollinated by the California yucca moth, it has a spiny base that can grow up to 6 feet wide and just as tall. When it hits maturity, usually after about six years, it sends up a flare in the form of a towering flower stalk, up to 15 feet high, that can catch your eye from miles away.